What’s in the Weather

Posted on December 30, 2010 by karenulvestad

The weather is an interesting part of a photograph.  Most of us like to see the sun and blue sky, so many photographs reflect this.

In the following photograph, it was a stormy and rainy day at the beach.  This is the Pacific Ocean, with large waves (approx. 10-20 feet).  It was a torrential downpour, and my partner held the umbrella over my camera to keep it semi-dry.

The weather caused the photograph to become mono-chromatic (one color), which adds to the stormy mood of the image.  In overcast or stormy weather, color can be brought out in a photograph.  The following image was taken the same same day.  I worked on the color and contrast in Photoshop to bring out the details in the image. 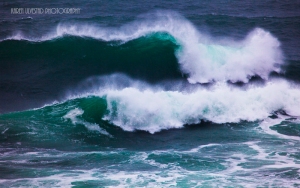 An overcast sky brings out color without harsh shadow and highlight.  In the second photograph, I composed the image with a focus on a series of waves.  Their color is richer, due to the lack of extreme darks and lights.

The first photograph shows the starkness of a storm, due to the lack of color and less contrast.  It feels cold.  The second looks warmer, because of the color.  It doesn’t have the feel of a cold, rainy Pacific Ocean storm coming ashore.  The image looks more inviting.

So, the weather can affect the colors that are shown in a photograph.  It can be used to show a mood or feeling.  It can make a photograph appealing to someone else, or truly give a sense of place/environment.